There are so many decisions I wrestle with when I’m preparing a competition routine. I seem to spend a lot of time deciding which skills to include and once I’ve decided, I struggle to choose who should perform those skills. What should be a team trick? What should we do as a highlight trick? Who can I COUNT ON to perform that trick when the pressure is on? It’s one of the bigger coaching decisions we all have to make and learning how to do it properly was a big step in my personal growth as a coach. I had to learn the power of the Self-Fulfilling Prophecy. 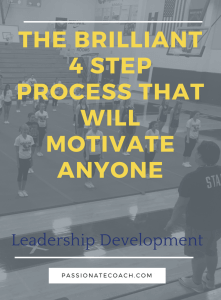 Understand The Danger of the Self-Fulfilling Prophecy

What I didn’t always realize is that my expectation of who could do the skill (and who couldn’t) would actually influence the end result.

Say for example you want to add a team triple pirouette to the routine. The problem is, you’re not sure if everyone on the team is capable of it. In fact, you’re pretty sure there’s one girl in particular who will likely struggle to be ready for competition. Of course, you want the best team skill you can have, and you don’t want one dancer’s ability to hold you back. Short of taking her out of the routine, how to do you guarantee you get her absolute best performance? It’s easier than you think.

It is a scientific fact, that a coach’s expectations of an athlete become a reality. (NERD ALERT: Click here for an example of the science that supports this phenomenon.) It can be that simple: what you expect of your dancers’s performance can, and will become a reality. It’s called the Self-Fulfilling Prophecy. The power and influence of this simple 4 step process are amazing.

A coach’s expectation of an athlete’s ability initiates a series of events that ultimately cause his or her expectations to be fulfilled.

Take my example above about a triple pirouette. Imagine you’re planning the choreography for your competitive routine and you decide on a team triple as your goal. Yet there is one dancer you expect will not be able to get that triple before competition season. Here’s how the Self-Fulfilling Prophecy works:

1. Coach develops an expectation for each athlete

When you make the decision to put in a team triple, you also have instincts about each dancer’s abilities. You have the dancers you know you can put upfront because their technique is superior. You expect them to consistently hit when it counts. Then there are the athletes you’re pretty confident will be fine by competition season. Finally, there’s the dancer that your gut tells you, won’t be able to get it. That thought and the thought alone starts a chain reaction.

2. Coach’s expectations influence his or her treatment of the individual athlete

Without even realizing it, you now start to treat the athlete differently because of your thought (conscious or unconscious) that she will struggle with the skill. You might watch her practice with your arms folded and project closed body language. Maybe she nails a turn in practice and you’re excited, yet you actually communicate surprise rather than positive reinforcement. When she struggles and starts to get down on herself, you may think, “Well, that’s what I thought would happen.” Then move on to work with another athlete, communicating disappointment (real or not).

3. The way the coach treats the athlete communicates important information to that dancer. The coach is communicating how capable she believes her dancer to be.

Your actions and words, many of them subconscious, start to communicate to your dancer that you don’t think she can do it. She will interpret your crossed arms, or lack of feedback, or surprise at success to mean she’s not capable. That inner dialogue then spirals from there. The dancer will quickly lose confidence in her ability. “Coach knows I can’t do it. It’s not worth the effort she’ll take me out of the routine anyway.”

4. The athlete’s behavior and performance conform to the coach’s expectations.

Sure enough, when the dancer continues to struggle in practice she is, in fact, unable to consistently perform the skill. Coach’s original expectations are confirmed. The dancer can’t do the triple;  we have to take it out of the routine. Disappointment reigns.

This Self-Fulfilling Prophecy is a vicious, never-ending cycle. 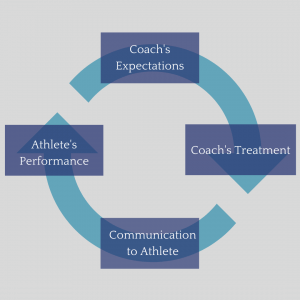 The good news is this process works in a positive direction too!

Say you have a new girl on the team who hasn’t gotten her headspring yet. Nonetheless, you took her on varsity because you believe she’ll be able to get it before you compete your hip hop routine. The same 4 step process can happen in the positive direction:

You believe your dancer will be able to do it. Maybe you think she’s close and just needs a little more time. Or possibly you saw an incredible work ethic in tryouts that make you think she can handle the varsity level. Whatever the reason, you develop the expectation that she will have the skill within a matter of weeks.

Because you believe she can do it you may start to give her more attention during practice when she’s working on the skill. Offering a little more time and advice than you would have otherwise. Maybe you give her an extra high five after a completed skill and a simple, “You got this”. Maybe she catches you smiling at her when she asks a senior to spot her during a water break. In lots of small ways, you start to treat her according to your expectation that she’ll be successful soon.

If you add up all those small actions, bits of body language, and words of encouragement, your dancer soon believes she’s capable. Your expectation caused you to treat her according to that expectation of competence and ability. Now you communicated that sense of ability to your dancer and she believes she can do it too.

Sure enough, a few weeks later she successfully completes her headspring on her own. She’s excited, and you even congratulate yourself for having a good eye for talent. You knew she could do it after all!

The reality is, your expectations can and will influence your athlete’s abilities. Now, of course, it has to be genuine because as I mentioned, many of the changes in treatment and communication may be unconscious and not purposeful. So you can’t just say to yourself, “I’m going to believe she’ll get that headspring” and expect the Self-Fulfilling Prophecy to work magic for your hip hop routine. If your true feelings are that she won’t do it, that’s what will be communicated.

Your power as a coach comes from the ability to be aware of your thoughts and beliefs about your athletes. Don’t pigeonhole them into certain roles, abilities, and expectations. If you deem one girl as a ‘hard worker’ and another as ‘lazy’ soon enough your expectations will alter how you treat them in subtle but important ways. Your behavior communicates your thoughts and beliefs to your dancers. Eventually, their behavior will confirm your beliefs and the cycle continues.

Take notice of your beliefs about your dancers. Do you hold certain expectations for their behaviors and skill level? Why? Are you sure those feelings are supported? Especially if you’ve known that athlete for years, make sure your beliefs aren’t based on behavior and skill level that is now years old and likely outdated.

When you develop an expectation about an athlete’s talent, character, or motivation, you are setting the stage for that expectation to become a reality.

So make sure it’s the reality you both want to see.

15 Meaningful Ways to be a Motivational Coach

7 Ways to Build Your Team’s Confidence

If you’d like more on building confidence, you can check out the e-book written specifically for dancers.

Share
6 of the Best Lessons Learned from Veteran Dance Coaches